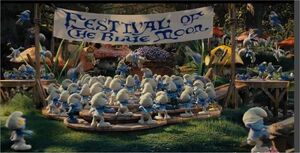 The Blue Moon Festival is a yearly event that happens in the Smurf Village on the night of a blue moon in the 2011 Smurfs movie, which the Smurfs celebrate with a song and dance. It is during this event that Papa Smurf is able to look into the future to see what it may hold for his little Smurfs.

In the event that took place in the movie, Papa Smurf had foreseen a dragon wand which Clumsy Smurf seemingly fails to catch and a bunch of cages in which all his little Smurfs are trapped. Papa Smurf took it as a dire warning that something terrible was about to happen, though he was reluctant to share it with his little Smurfs. However, as the story of the movie unfolds, parts of the vision began to unfold, as Gargamel turns the cellar of the Belvedere Castle in New York City into his laboratory in which he intends to extract the essence of all the Smurfs in order to power his magic. However, Clumsy does succeed in getting the dragon wand out of Gargamel's hands and defeats him by blasting him so far away from the Smurfs that he lands in a pile of garbage bags. With the portal reopened on the night of the blue moon in the present, the Smurfs are able to return home.

In the novel based on the movie, Papa Smurf sees in a vision in the following year's Blue Moon Festival that Gargamel is still trapped in the present, but this time he is in Las Vegas!