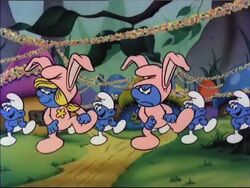 In "The Smurfs Springtime Special", the Smurfs were preparing for an Easter Festival with the painting of eggs and the creation of Easter bunny costumes for Smurfette and Grouchy to dance in. It was during the preparations that Brainy and Clumsy found an egg from which hatched a duckling that latched onto Smurfette, thinking she was its mother. Gargamel intended to destroy the Smurfs and foil their celebrations by putting Mother Nature to sleep with the scent of blood roses, thus causing a blizzard to take place just as the weather was warming up. However, the Smurfs thwarted Gargamel's plans and revived Mother Nature, who in turn revived the baby duck who was rendered lifeless by Balthazar's "magic wand of the future", and the Easter Festival took place with no further problems.

Retrieved from "https://smurfs.fandom.com/wiki/Easter?oldid=49875"
Community content is available under CC-BY-SA unless otherwise noted.