The Gray Smurfs were negative duplicates of the original Smurfs that were created by Papa Smurf in order to get his little Smurfs under control and not fighting with themselves all the time. They first appeared in the comic book story "The Smurf Menace". The Gray Smurfs were so named due to the darker tone of the Smurf clothes and skin they wear.

Some of the Gray Smurfs were direct counterparts of the Smurfs, including their leader, the Great Leader (a negative Papa Smurf duplicate who was more authoritarian than paternal), and negative duplicates of Greedy Smurf, Jokey Smurf, a black-haired Smurfette, Handy Smurf, and Brainy Smurf who featured all the negative traits of the originals, yet nothing of the positive ones. They lived in a negative duplicate of the Smurf Village that had a walled fence surrounding its perimeter. 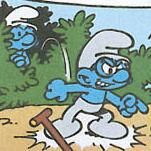 Brainy Smurf and his Gray counterpart.

Greedy Smurf and his Gray counterpart, who eats even what others were eating. 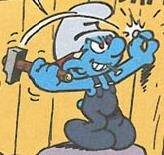 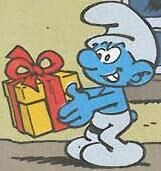 A Gray Smurf gives prank gifts just like Jokey Smurf, but they have punching gloves instead of fireworks. 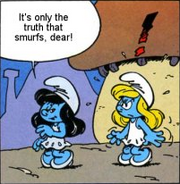 A gray smurf starting to dig after noticing the Smurf leaders approaching.