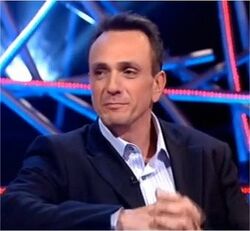 Hank Albert Azaria (born April 25, 1964) is an American film, television and stage actor, director, comedian. He is noted for being one of the principal voice actors on the animated television series The Simpsons. He performs the voices of Moe Szyslak, Chief Wiggum and numerous other characters.

Hank Azaria played the role of Gargamel in the 2011 Smurfs movie and its 2013 sequel. He has voiced the same character in the animated features The Smurfs: A Christmas Carol and The Smurfs: The Legend Of Smurfy Hollow.

Retrieved from "https://smurfs.fandom.com/wiki/Hank_Azaria?oldid=45622"
Community content is available under CC-BY-SA unless otherwise noted.