King Smurf (original French title: Le Schtroumpfissime) is the second comic book adventure of the Smurfs, and the name of the main character who assumes power in the absence of Papa Smurf. The story was written and drawn by Peyo with Yvan Delporte as co-writer.

King Smurf is a regular Smurf whose actual name and position is never stated in the original adventure in which he is the titular main character.

When Papa Smurf leaves the village for a few weeks in order to get some euphorbium leaves (which he needed to complete an herbal potion for undisclosed use), the Smurfs are left with no leader. Arguments and fights begin when they all claim the post, until they decide the best way to resolve the situation is to have a vote, though at first they all announce that they are voting for themselves.

One particular (but unnamed) Smurf makes promises to almost all the Smurfs and they agree to vote for him. He also puts up posters, holds a parade, makes self-praising election speeches and offers rounds of raspberry juice. Soon, the only other candidate turns out to be Brainy Smurf who, as usual, simply claims that he is the only suitable Smurf since (according to himself only) "Papa Smurf always said so". This arrogance and constant lecturing actually puts all the other Smurfs off him. The Smurf thus wins 98% of the votes; the other two going to Brainy Smurf, who is supported by himself, and Dopey Smurf: the winning Smurf had told him to vote for Brainy Smurf, expecting him to get it wrong when it came to the actual vote. Only one Smurf couldn't vote for either candidate because he had ruined his ballot with spilled ink.

The winning Smurf then proceeds to put on gold clothes and asks the others to refer to him as "King Smurf". The Smurfs laugh off his pretense, something he himself did not take with amusement. Instead he resolves to teach them their place and becomes authoritarian. He chooses Harmony to be his official herald and Hefty as captain of the royal guard, the latter of which King Smurf uses to force the other Smurfs into building a royal palace that becomes his official residence. Later on, Jokey is arrested for pulling one of his "surprises" on Hefty, and although he is acquitted by King Smurf due to a perceived lack of a sense of humor on Hefty's part, Jokey is thrown into jail when he pulled a "surprise" on King Smurf. 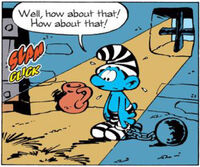 Ironically the only one to show him any real support was Brainy Smurf, but being the sort that goes whichever way the wind blows, he later joins a resistance movement which leads to his capture during a jailbreak that frees Jokey from imprisonment. The rebels set up a secret base for themselves in the forest, insulting and provoking King Smurf from a distance. By offering the other Smurfs gold medals, King Smurf manages to mount an expedition into the forest to confront the rebellion, but it becomes a failure, with the rebels simply getting more recruits in the process.

To prevent any more defections, King Smurf has the village surrounded by a wooden wall and moat. When he refuses to abdicate, the rebels storm the gates to the village. King Smurf's troops fight back by pelting them with tomatoes. The rebels eventually break through the wooden wall and the battle carries on inside the village, causing widespread destruction. During the fight, a rebel takes explosives from Papa Smurf's laboratory and blows up King Smurf's castle. King Smurf is left helpless with only his guards to support him. He still defiantly refuses to stand down and the final fight is about to start when Papa Smurf returns from his journey and demands to know what was going on.

The sudden return of paternal authority brings an immediate end to the battle and the embarrassed Smurfs have to explain themselves to Papa Smurf. He is very angry with them because they "behaved like humans" and mostly put the blame on King Smurf. Extremely remorseful, ex-King Smurf simply returns to his old home, takes a bucket and broom, and says he would clean up all the damage the village had suffered. The other Smurfs feel sorry for him and offer their help, claiming it was also their fault, and that they still liked him after all. Ex-King Smurf is touched by this and so is Papa Smurf, who forgives them all. King Smurf's outfit is then used for a scarecrow.

Harmony Smurf is rejected from the village orchestra since he plays badly every instrument (even the triangle!). He meets a strange fairy who gives him a magic instrument, the "turlusiphone", which always plays well. However, when Harmony plays the turlusiphone to the other Smurfs, they fall asleep. Harmony discovers the fairy was really Gargamel in disguise and goes to Gargamel's laboratory to find the cure for the turlusiphone-induced sleep, and faces both Gargamel and his cat Azrael. Sadly, Gargamel's books say there's no known cure for the turlusiphone. Angry, Harmony kicks the turlusiphone to the chimney and leaves Gargamel's home. At the village, Harmony takes his old trumpet and decides to play a requiem for his fellow Smurfs. The miracle happens when his music is so awful that awakens the Smurfs; Nobody can stay asleep with that noise. The Smurfs decide to accept Harmony at the orchestra due to his heroism, but they still cover their ears when he plays.

The adventure of King Smurf first started in Spirou magazine in 1964 as Le Schtroumpfissime (cf. illustrissimo = most illustrious = a term sometimes used to flatter European monarchs of the medieval and Renaissance period). While not the second story to appear in Spirou, it was the titular story to be published in book format. In the original French book edition from 1965, the comic contains two stories, the titular one and Schtroumphonie en Ut, a story about the frustrated efforts of Harmony Smurf to make some acceptable music and being tricked by Gargamel into playing an enchanted musical instrument which has a disastrous effect on his fellow Smurfs. An English Canadian edition appeared in 1978 by Dupuis in collaboration with Granger Frères Limitée. A later edition was published by Random House. The English edition of the comic appeared in 1997, published by Hodder & Stoughton, and in 2011 by Papercutz, which retitles the story as "The Smurf King".