Black Smurf redirects here. You may also be looking for the episode called The Purple Smurfs. For the original story it was based on, see The Black Smurfs.

The Purple Smurfs made their first appearance in "The Purple Smurfs". They are based on the original comic books' Black Smurfs, who first appeared in the comic book story "The Black Smurfs". It is probably due to the nature of the characters that they were made purple for the racially-cautious English-speaking audience, both for the cartoon show episode and for the English translation of the original story.

The comic book story "The Egg And The Smurfs" suggests that Grouchy's behavior has come from being the first Smurf turned into a Black Smurf and somehow some of its effects stuck with him when he was cured. This explanation does not appear in the cartoon show since "The Purple Smurfs" took place after "The Smurfette" in its history. In the story book version of "The Black Smurfs", Lazy Smurf is identified as the first Smurf infected with the disease.

A second appearance, although unofficial, was later in a one page Gag where Jokey Smurf painted himself black and went around the village in full Black smurf fashion causing panic with the others who believed that a second epidemic was about to break out. The joke however was on him as Handy Smurf started asking around who had taken his black paint, remarking that the paint will never come off. In the version that appears in the "Romeo And Smurfette" comic book, the black paint was changed to green, and in the Papercutz version that appears in "The Return Of The Smurfette" it was changed to purple.

The Black Smurf also appears in the 1994 The Smurfs video game released for multiple game systems, while the Purple Smurf version appears in the fan-created Flash game Day Of The Purple Smurf, which was created as an unofficial sequel to Smurf: Rescue In Gargamel's Castle, as well as in the Smurfs' Village game app.

Jokey's prank involving a similar illness that backfires on him 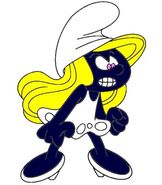 Smurfette as she would have appeared as a Black Smurf 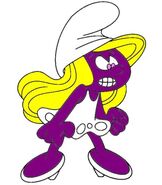 Recolor of Black Smurfette, displaying her as a purple Smurf.

Black Smurf and Black Smurf painted blue appear in the 1964 list, despite the fact that they are transformed versions of pre-existing Smurfs (the painted blue is even implied to be either Grouchy Smurf or Hefty Smurf). 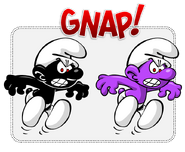 A Black Smurf and a Purple Smurf shown for comparison.

A Purple Smurf from Smurfs' Village. 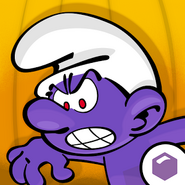 Add a photo to this gallery

In the cartoon show:

Retrieved from "https://smurfs.fandom.com/wiki/Purple_Smurf?oldid=80078"
Community content is available under CC-BY-SA unless otherwise noted.