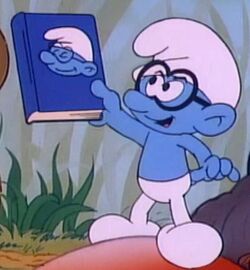 Quotations Of Brainy Smurf is a series of books, usually with this part in each book's main title, written by Brainy Smurf that usually contains bits of folk wisdom that comes from Brainy himself. Very few, if any, Smurfs actually read these books.

While the books contain purported knowledge, at least once did Quotations Of Brainy Smurf actually save the Smurfs. In the episode "Archives of Evil," the evil sorcerer Nemesis -- who has caused havoc at the wizards' library and taken Papa Smurf and others prisoner -- begins siphoning the writings from spellbooks and other scholarly volumes to aid his plan to rule the world. When the other Smurfs go to rescue Papa and are subsequently taken prisoner, Brainy lets slip about Quotations Of Brainy Smurf. When Nemesis uses his ring to siphon the knowledge, he quickly realizes the books contain nonsensical ramblings, counteracting his plan and eventually spelling his defeat.

In several episodes, Hefty Smurf has used two or more of these volumes as weights because he claims that they are heavier than his barbells. It is also known that Flighty Smurf has tried to read "The Quotations of Brainy Smurf", but due to his smurfy nature, has never succeeded.

Also in the episode, "Big Shot Smurfs", once he read his quotations to the Uphorn tribe, however, the tribe feel this is annoying and leave him. This is also one of the events that the Uphorns start to disagree with Brainy.