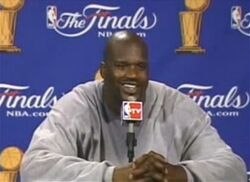 Shaquille Rashaun O'Neal (/ʃəˈkiːl/ shə-KEEL; born March 6, 1972), nicknamed Shaq (/ˈʃæk/ SHAK), is an American retired basketball player, former rapper and current analyst on the television program Inside the NBA. Standing 7 ft 1 in (2.16 m) tall and weighing 325 pounds (147 kg), he was one of the heaviest players ever to play in the NBA. Throughout his 19-year career, O'Neal used his size and strength to overpower opponents for points and rebounds.

He makes a vocal performance in The Smurfs 2 as Smooth Smurf.

Retrieved from "https://smurfs.fandom.com/wiki/Shaquille_O%27Neal?oldid=45669"
Community content is available under CC-BY-SA unless otherwise noted.