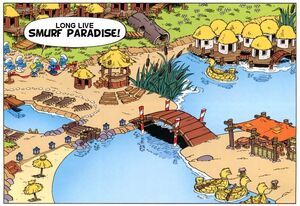 Smurf Paradise (originally called Schtroumpf les Bains, or "The Smurf Baths", in French) was the name of a location that Handy Smurf had found and developed into a private beach resort for the Smurfs in the comic book story "Bathing Smurfs". It consisted of a series of huts that were made from natural materials found in that location, as well as a swimming pool, a bandstand for entertainment, and a dining commons. Boats made from reeds could be used for traveling on the lake.

The place was originally a private getaway for Handy when he became severely overworked, but after sharing this getaway with Poet and Painter, Handy found out that the other Smurfs wanted to experience the place for themselves and thus it was developed into the resort intended for only a small group of Smurfs to use at a time. Unfortunately, Smurf Paradise became so popular that the entire village ended up going there for a vacation, which made things rather uncomfortable at the resort as accommodations had to be made for everyone.

However, after Poet and Painter have returned to the Smurf Village to watch over it while everyone else has gone to Smurf Paradise, Gargamel has managed to find his way to the Smurf Village and planned to camp in the woods near the village in order to wait for the Smurfs to return. When Papa Smurf was warned by the two Smurfs about Gargamel's presence, he had all his little Smurfs stay at the beach resort for their safety while he, Painter, and Hefty worked on driving Gargamel away from the village by warning him that there's a fire at his hovel. Gargamel thought that the fire was a trick, but after realizing that with his hovel burning down he would lose all his childhood memories, he returned there while leaving a trail of cherries behind so he could find his way back to the village, only to find that all that was burning was a bundle of branches in the back of his hovel. Gargamel tried to return along the trail he had left behind when he saw that the bear that has chased him through the forest is now eating up the trail of cherries. With the evil wizard safely driven away, the Smurfs were allowed to return to their village.

Eventually, by the end of the story, the location was abandoned only to be used by the beavers in making homes for themselves.

Its equivalent in the Smurfs cartoon show is Smurf Beach Village.