You may also be looking for the Smurfs' Village game.

The Smurf Village is the home residence for the Smurfs. It is located in a forest, the exact location of which is unknown to all but Smurfs. In the "non-canonical" Smurf story "The Smurfs And The Magic Flute", Homnibus used "hypno-kinesis" in order to transport Sir Johan and Peewit as close to the village as possible, where they found a Smurf to guide them the rest of the way there. In the cartoon show, a magic spell prevents non-Smurfs from ever finding the village, though strangely as seen in the episode "Revenge Of The Smurfs" it hasn't stopped humans from accidentally rampaging through it. In the 2011 Smurfs movie, it is protected by a magical field that renders it invisible to all outsiders.

The village resembles a patch of large mushrooms, since their houses are built to resemble mushrooms, probably serving as camouflage to unsuspecting passersby. Besides houses, it also has an outdoor theater, a meeting house, a kitchen, a storehouse, a dining hall facility, a playing field for sports games, a hospital or infirmary for treating sick and injured Smurfs, and a field for growing crops. Though about 100 Smurfs live in this village, it appears to be rather small in area size.

The Smurf Village is also adjacent to a large body of water that their sailing ship, the S.S. Smurf II, launches off into.

Various secret artifacts have been kept in the village, such as the Long Life Stone that keeps Smurfs from accelerated aging and the Time Scrolls that enable Smurfs to travel to any point in time (and to any geographical location).

The Smurf Village's first known appearance was in the original comic book version of "The Smurfs And The Magic Flute". At the time the story was first published, the Smurf Village was located in a desolate rock-filled forest called the Cursed Land, to which Johan and Peewit were sent to locate them. It was only when the Smurfs became popular enough to warrant their own comic book series that the village was relocated to a flourishing animal-filled forest seen in the animated version of the story as well as all subsequent interpretations of the Smurfs.

Locations in the Smurf Village

Constant locations in all Smurfs media

Temporary locations in all Smurfs media 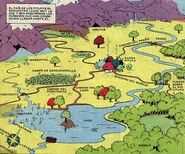 Statue of smurfy liberty
Add a photo to this gallery
Retrieved from "https://smurfs.fandom.com/wiki/Smurf_Village?oldid=80623"
Community content is available under CC-BY-SA unless otherwise noted.