Smurfette’s Magic Match is a free social game for the Apple iOS, Kindle Fire, and any Android-compatible tablets where players must help our Smurfette and this the puzzle game as a game in the style of Bejeweled. The game is created by Beeline Inc.

Smurfette learns that something has happened in the village and the Smurfs have lost memory and creates a potion of memory for the Smurfs remember something that happened so you should remove obstacles and overcome levels and rediscover the characters of the Smurfs in several episodes of the game.

Besides 'rescuing' Smurfs, player can also purchase and change Smurfette's clothing by using the money earned during playing the game. 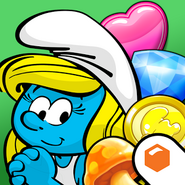 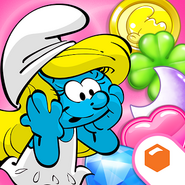