Title Translation of
Smurfette For A Day

Een dagje Smurfin
"Smurfette For A Day" is a Season 3 episode from the Smurfs cartoon show.

Hefty, Handy, and Clumsy are working together with Smurfette as they are building a new playground for Baby Smurf, with Hefty doing the heavy lifting, Handy doing the planning, and Clumsy following Smurfette's directions for placing everything by using the surveyor's scope. Hefty sounds so excited about all the rides they're going to set up that Handy thinks Hefty can't wait to play on them, but Hefty corrects his statement by saying he can't wait for Baby Smurf to play on them.

Smurfette is now directing Clumsy for the placement of the merry-go-round, but as he follows her directions for where to place the measuring rod, he ends up falling into a hole that the Smurfs claim Farmer had dug up, though he says he never dug a hole that deep. Fortunately, somebody caught his fall, as Clumsy fell on the head of a gnome who was responsible for making the hole. He calls himself Picklick, a miner who's been burrowing underground, and he's wondering what sort of creatures the Smurfs are. As they introduce themselves, the gnome says he was only coming up to get some real food after his own food had run out and he had to live on eating worms and bugs. Smurfette offers to give Picklick some real food to eat when the gnome takes notice of how she sounds and smells different from the rest. The other Smurfs tell the gnome that she's a Smurfette, which makes him really interested in her.

The Smurfs take Picklick into the village where Greedy offers him food to eat, and the village cook is rather appalled by the sight of how the gnome devours his food. Handy wonders what Picklick was doing underground, and he says that he's looking for the greatest treasure on earth, or rather, under it, which is the Cavern Of Gems. His description of the gems that the cavern contains sounds impressive, but as the Smurfs were hoping Picklick would be on his way, he decides that he's going to stay for a spell now that he's met Smurfette...and the way he mentions it makes Hefty look at him with suspicious eyes.

A little later, Picklick pays Smurfette a visit at her house by giving her a bouquet of weeds, which she tries to accept without hurting his feelings. It is at this point that he announces that he and Smurfette are going to be married, which the other Smurfs watching this scene overhear. Although Smurfette politely refuses the proposal, saying she could never leave the Smurf Village, Picklick refuses to take no for an answer and tries to have Smurfette give him some sugar. Hefty and Handy step in to protect Smurfette and to have Picklick depart from the village immediately, but Picklick says that they haven't seen the last of him before he dives right into the ground and burrows away. Handy asks if Smurfette is all right, and she answers that though she is grateful, she is quite capable of handling herself and slams the door on the two Smurfs.

Sometime later, as Hefty is carrying a big boulder toward Baby's new playground, a hole emerges right near Smurfette, and Hefty drops the boulder right on Picklick just before he makes a grab for her. Smurfette doesn't like that Hefty is trying to protect her from something she feels that she can handle herself. However, Hefty voices his concerns to his fellow Smurfs, which makes them wonder how they can protect Smurfette from Picklick without letting her know about it. Handy suggests telling her that Papa Smurf needs her at Mother Nature's house, while they present Picklick with a fake Smurfette. As to who would take on the role of the fake Smurfette, Handy says it would have to be the strongest and bravest Smurf in the village...and naturally, Hefty is chosen. Strangely, it isn't dressing like a Smurfette that bothers him, but rather having to wear Smurfette's shoes, which hurt his feet. But soon Picklick shows up, and though he notices that "Smurfette" sounds different, he falls for the bait and takes Hefty with him underground.

Meanwhile, a female gnome is busy dusting the Cavern Of Gems, sounding rather bored with having every gem a gnome could ever want but having nothing exciting happening...until a hole forms in the ceiling and both Picklick and "Smurfette" fall into it. Picklick looks around and sees that he has found the Cavern Of Gems at least...but he has also found trouble, in the form of its guardian named Guardiana the female gnome, who tells Picklick to get his hands off her gems. She causes stalactites to fall from the ceiling and imprison the two intruders, then ponders what kind of gems she can turn them into, telling them that either way they're not going to escape.

Handy goes to tell the other Smurfs that their plan of fooling Picklick with Hefty dressed as Smurfette has worked too well and he has taken the fake Smurfette underground. While they go bring Baby Smurf safely into the village, Picklick tells Guardiana that she can do whatever she wants with him, but to leave his girlfriend alone. Guardiana notices the "female" companion who is with him and decides to spare "her" if only to have another female to talk to. Hefty chooses to play along in order to distract Guardiana so he can dig his way out. Back on the surface, Papa Smurf arrives with Smurfette to scold Handy for making up the story about Papa Smurf needing her, and Handy says they needed to do that to protect Smurfette from a gnome who was after now, and now has Hefty who is dressed as Smurfette. She is so upset that her fellow Smurfs would endanger themselves in order to protect her that she jumps down into the hole to lead a rescue operation to get Hefty back safely, and Papa Smurf tells his little Smurfs to follow her.

In the Cavern Of Gems, Guardiana and "Smurfette" have a girl talk with each other about Picklick, and Guardiana finds herself so smitten with the male gnome that when he escapes and grabs her instead of "Smurfette", she ends up falling in love with her. Papa Smurf, Smurfette, and Farmer descend down into the cavern and find that Hefty is all right and that Picklick and Guardiana have fallen in love and want to get married. What surprises them, though, is that the happy couple want Hefty to be their best man at the wedding, and soon the Smurfette throw rice upon the happy newlyweds as they walk down the aisle with each other. 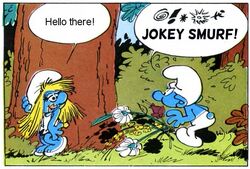 Smurfette For A Day • Full Episode • The Smurfs
English version
Add a photo to this gallery
Retrieved from "https://smurfs.fandom.com/wiki/Smurfette_For_A_Day?oldid=81919"
Community content is available under CC-BY-SA unless otherwise noted.