Smurfs Wiki
Register
Don't have an account?
Sign In
Advertisement
in: Cartoon show specials, Episodes focusing on Smurfette, Episodes about romance,
and 3 more 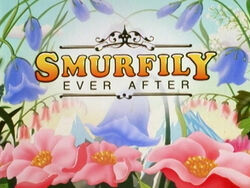 Title Translation of
Smurfily Ever After

Puffosamente tua
"Smurfily Ever After" is a Smurfs special that aired on February 13, 1985 during Season 4 of the 1980s Smurfs cartoon show.

It is a beautiful day out in Woodelf Grove, that Laconia enjoys listening to her fellow woodelf Woody playing music from his pan pipe, although she mostly enjoys running her fingers on the pipes to feel the music coming from them. After he finishes playing his song, Woody asks Laconia in sign language if she will marry him. Laconia excitedly signs that she will, which makes Woody so happy that he falls off the mushroom he was sitting on. He tells Laconia that they need to tell Papa Smurf right away.

At the Smurf Village, Papa Smurf tells the happy couple that he would be delighted to preside at the wedding, and Smurfette feels honored to have Laconia ask her to be her maid of honor, saying that this will be the wedding of the year. Brainy amends that comment, saying that it will be the wedding of the decade, even of the century. Woody expresses his desire to have a small wedding, but Smurfette feels that they both deserve the best, and she will make sure that her fellow Smurfs will make their wedding the smurfiest.

Soon the Smurfs are hard at work with Smurfette supervising all the preparations, feeling like she's the one who's getting married. Brainy tells Smurfette that all the invitations have been made, so she assigns Clumsy with the duty of delivering them all -- a whole net full of invitations that Handy drops upon Clumsy! She says that now everybody will be able to attend the wedding at Bluebell Dell.

Clumsy's first stop in his delivering the invitations is Pussywillow Hollow, where he meets with the pixies to inform them of the wedding. They offer to help Clumsy deliver the invitations to the other guests by flying him and his delivery bag over the entire forest. However, one of the invitations drops out of the bag and drifts onto the surface of the river, where it finds itself in the hands of the evil wizard Gargamel. Upon reading its message, Gargamel decides he will attend the wedding, if only because it will give him the perfect opportunity to capture the Smurfs once and for all.

In the Smurf Village, Smurfette has Laconia attend a wedding shower where her friends, the Pussywillow Pixies, present the young woodelf with a beautiful wedding gown that leaves her feeling happy beyond any level of description. Acorn wishes that she is the one who's getting married, and Elderberry says that it's important to find the right person to get married to. That makes Smurfette wonder about her fellow Smurfs, what being married to any of them would be like. As she goes to check up on Greedy and his preparation of the wedding cake, she imagines the moment that she and Greedy unite with each other...only to find that he's more in love with the wedding banquet than with her! Her next object of imagining, Vanity, makes her realize that he's already in love with someone else!

Meanwhile, in Gargamel's castle, the evil wizard is preparing a little something of his own for the wedding...a magical musical machine that he calls his Ghoulliope, which he intends to play at the wedding so he can make the Smurfs dance to their doom. He says that his music machine must be finished by midnight that night, which is when he will cast the spells to put the "ghoul" in his Ghoulliope.

Back in the village, Smurfette calls Hefty for the favor of hiding the giant wedding cake away from Greedy, and as Hefty applies his muscle power to easily lifting up the cake and taking it away, Smurfette imagines what it would be like to marry him. In that moment, as Hefty is hurriedly carrying Smurfette home in his arms, she finds out that it isn't because he wants to share his love for her, but rather because it's good exercise. After watching herself being with Hefty in his gym following the wedding, seeing that he's more in love with building his body than building his relationship, Smurfette realizes that she doesn't have the strength to marry him.

Her imaginings of who will be the right Smurf for her to marry continue, as she settles in her bed and sees what a marriage with Farmer Smurf will be like: having to rise and shine early in the morning to tend to the fields. Then she imagines Handy as her future husband, and sees herself having to deal with him keeping her up at night fixing nonexistent leaks in her roof. Then she imagines Jokey as Mr. Right, and sees that he'd rather play jokes on her all the time. Finally she decides to go to sleep, thinking that maybe she will meet her future husband at the wedding.

Meanwhile, Gargamel's work on his Ghoulliope is complete, and as he steps inside the musical machine wearing earmuffs to protect himself, he makes the final incantation while striking the keys of the machine's organ. Soon ghostly spirits are seen weaving in and out of the pipes as the ghastly music plays, and Gargamel sees that his Ghoulliope works, being thankful that Mummy's music lessons have paid off. Now all that's left for him to do is bring the machine over to Bluebell Dell while it's still dark.

The following day, as Smurfette continues to oversee the wedding preparations, she goes out into the forest to pick a bouquet of flowers when she sees a dancing bush with legs. It is Clumsy trying to teach himself how to dance at the wedding without letting anybody see him. Smurfette offers to give him some dancing lessons, and as she leads him through some steps, she imagines what being married to Clumsy will be like. She sees herself on a stage with Clumsy being introduced by Brainy as the dancing duo, and as they dance, Clumsy continually steps on her feet until they both end up sliding down into the great starry void.

Finally frustrated with all the mishaps she sees in her future marriage matches, Smurfette goes to talk to Papa Smurf about how she will find Mr. Right among her fellow Smurfs when she sees that everything about them seems wrong. Papa Smurf tells her that she will find Mr. Right when the smurfy things about the Smurf she falls in love with make the unsmurfy things about him seem smurfier. This makes Smurfette feel better about herself, though as she leaves Papa Smurf to his preparing for the wedding, she is almost tempted to imagine herself being with Papa Smurf...and then decides not to chance it.

At the wedding scene in Bluebell Dell, while Brainy tries to give Woody a "pep talk" to bolster his courage which ends up making the bridegroom faint, Papa Smurf notices something odd about a note left from Mother Nature that appears next to a musical machine. Then as the bride is escorted to the altar to marry her bridegroom, Gargamel changes the wedding tune so that it now plays a haunting hypnotic melody that puts the Smurfs in a trance as they walk helplessly up an extending ramp toward a boiling cauldron.

Laconia, who is somehow unaffected by the Ghoulliope's evil music, grabs the pillows that the wedding rings were carried on and ties them over Smurfette's ears with a sash, breaking the music's control on her. The bride and the maid of honor go over to the wedding cake and start blocking up the organ pipes with bits pulled out of the cake until the entire cake collapses right onto the rice catapult. Laconia launches the catapult and blocks up the cauldron, freeing the Smurfs from the hypnotic control of the music and also causing pressure to build up inside the Ghoulliope until it explodes, sending Gargamel and Azrael flying straight into the muck pond.

As Papa Smurf checks around to see if everyone is all right, Smurfette mourns over her "wedding of the century" now being the "disaster of the century". But Papa Smurf makes Smurfette see that all is not lost, that as long as Woody and Laconia have love for each other, that's all that really matters for a perfect wedding. Later in the village, the Smurfs and invited guests watch the two woodelves recite their vows for one another in sign language, and cheer as they kiss each other upon Papa Smurf pronouncing them to be woodelf and wife. As Feathers carries the newlyweds away on a flower wreath to enjoy their marital bliss, Laconia tosses the bouquet and Smurfette catches it, which means that she will be the next to marry. Grouchy and Baby watch the happy couple disappear into the horizon, with Grouchy tearfully saying "I still hate weddings".