The Smurfs (French: Les Schtroumpfs) is a comic and television franchise centered on a group of small blue fictional creatures called Smurfs, created and first introduced as a series of comic strips by the Belgian cartoonist Peyo (pen name of Pierre Culliford) on October 23, 1958. The original term and the accompanying language came during a meal Peyo was having with his colleague and friend André Franquin in which, having momentarily forgotten the word "salt", Peyo asked him (in French) to pass the schtroumpf. Franquin replied: "Here's the Schtroumpf — when you are done schtroumpfing, schtroumpf it back" and the two spent the rest of that weekend speaking in schtroumpf language. The name was later translated into Dutch as Smurf, which was adopted in English.

At the time he came up with the creative idea for the Smurfs, Peyo was the creator, artist, and writer of the Franco-Belgian comics series titled Johan et Pirlouit (translated to English as Johan and Peewit), set in Europe during the Middle Ages and including elements of sword-and-sorcery. Johan serves as a brave young page to the king, and Peewit (Pirlouit, pronounced Peer-loo-ee) functions as his faithful, if boastful and cheating, midget sidekick.

In 1958, Spirou magazine started to publish the Johan and Pirlouit story La Flûte à six trous ("The Flute with Six Holes"). The adventure involved them recovering a magic flute, which required some sorcery by the wizard Homnibus. In this manner they met a tiny, blue-skinned humanoid creature in white clothing called a "Schtroumpf", followed by his numerous peers who looked just like him, with an elderly leader who wore red clothing and had a white beard. Their first appearance was published in Spirou on October 23, 1958. The characters proved to be a huge success, and the first independent Smurf stories appeared in Spirou in 1959, together with the first merchandising. The Smurfs shared more adventures with Johan and Pirlouit, got their own series and all subsequent publications of the original story were retitled La Flûte à six Schtroumpfs (also the title of the movie version of the story, which in English became "The Smurfs And The Magic Flute").

With the commercial success of the Smurfs came the merchandising empire of Smurf miniatures, models, games, and toys. Entire collecting clubs have devoted themselves to collecting PVC Smurfs, and Smurf merchandise.

In the 2011 Smurfs movie, the cartoon strips appear in a book authored by Peyo (who in the story's universe is the documentor of the Smurfs' legend and history rather than their creator) which the Smurfs find in Mr. Wong's Mystical Emporium in New York City, where they discover the magic spell to create the blue moon which will open the portal back to their own place in time.

Smurfs in comic appearance also appears on other Belgian comic series. In another Peyo creation Benoît Brisefer, a woman was reading a magazine with a Smurf picture on the cover in the story "The Bodoni Circus", also, a picture of the Smurfs had been appeared on a calendar.

In another Peyo creation, "Jacky et Célestin", there was a hotel called Sctroumpfs, and there were many Smurfs decorations inside.

In Natacha, there was a woman wearing a Smurfs T-shirt, and the T-shirt had a theme of celebrating the Smurfs' 40th Anniversary (1998). 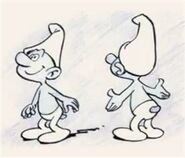 Peyo's original drawings of the Smurfs circa 1958 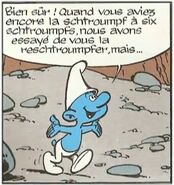