Apart from the titular one (which became the basis for the cartoon show episode "The Purple Smurfs"), it contains two other stories: The Flying Smurf (Le Schtroumpf Volant) and The Smurfnapper (Le Voleur de Schtroumpfs).

As most of the Smurfs gather to work on the bridge crossing the river in the forest, Papa Smurf spots one of them dozing off and sends him into the forest to cut some logs. As he works on chopping down his first tree, that Smurf gets stung by a fly known as the Bzz Fly that turns his skin jet black, drives him insane and reduces his vocabulary to the single word "gnap!"

Papa Smurf becomes concerned when that Smurf fails to return and sends another Smurf, Brainy, to go find him. No sooner does Brainy find him, though, that he quickly returns to Papa Smurf, telling him that that Smurf has turned black. Papa Smurf becomes fearful, realizing that that Smurf has been infected by the Bzz fly. Brainy spots the transformed Smurf hopping his way to the village. They chase after him and capture him, binding him in rope. After Papa Smurf tells some of his little Smurfs to take the captured black Smurf to his house, he tells the others that the last known case of this disease was when he was 108 years old, but now he can't remember what the cure was.

However, the captured black Smurf doesn't stay bound for long. After breaking his bonds, he spots a normal Smurf outside his house and bites his tail, turning that Smurf black as well. As he watches the two black Smurfs hop into the forest, Papa Smurf sees that he needs to find the antidote. He tells his little Smurfs not to disturb him as he spends the night working on a possible cure for the black Smurfs.

By morning, Papa Smurf send some Smurfs to capture one, though in the process another Smurf gets bitten while trying to capture one, getting caught in his own lasso. This results in some Smurfs capturing the new changed one. Papa Smurf tries his cures on the captive though it fails as it only causes him to faint. It was a mistake, however, to release him, as Papa Smurf sends a Smurf to carry him back to his house, but the Black Smurf wakes up and  escapes by biting the Smurf's tail who in turns infects a bystander.

He and the new transformed Smurfs went back to the forest to escape capture. The next day none of the Smurfs want to get another Black Smurf, so Papa sends three Smurfs out to get one. They capture a Black Smurf as one of them acts as bait while the others knock it out with a rock. They return with it and Papa Smurf pours the antidote on the Black Smurf's head, which causes it to break its bonds. Papa Smurf then runs for cover as a bunch of Black Smurfs hops out of his laboratory and into the forest...all except for one which is knocked out and dragged back inside Papa Smurf's laboratory, though he escapes as well.

Having no other option, Papa Smurf and his remaining Smurfs leave to capture the Bzz fly as fifteen of them (sixteen at the point during Papa Smurf's talk) are now infected. However, some of the Smurfs end up capturing other animals, while the infected keep adding to their numbers. Eventually Papa Smurf captures the Bzz fly; however, he fails to get a cure from it, which causes problems. As time is running out each day, dozens of Smurfs are getting infected, until they are only about a handful left. Papa Smurf then decides to give it a tuberose flower to eat, which causes it to sneeze and turn blue. Realizing the cure is tuberose pollen, he and Brainy go out to test it on a Black Smurf and it works! They get all the flowers and when Papa asks if everyone is here, one Smurf replies there still one missing before they here the sound of him getting infected, before replying that everyone is here and they take the flowers home.

Meanwhile, the first Black Smurf and leader of the transformed Smurfs sneaks into the village and overhears this, so to avoid being sprayed with the antidote, he paints himself blue. After giving all the remaining Smurfs their bellows that contain the antidote, they prepare to battle the Black Smurfs. However, a swarm of all the infected Smurfs appear into the village and attack. It becomes a disaster, for if a Black Smurf was cured, he is immediately bitten again. Also the fake blue Smurf turns the favor over to his side by biting some of the Smurfs with bellows.

This changes the playing field as this enables his transformed brethren to turn the last remaining Smurfs black -- all except for but Papa Smurf, who is now out of pollen. The village leader runs to his laboratory to get more of the antidote when the leader who painted himself blue ambushed him. This fails as he knocks over a lamp, causing a fire in Papa Smurf's house. While Papa Smurf is trying to douse the flames, the leader bites him. Knowing all hope is lost tells the reader this as the village leader turns black as well. Fortunately, a explosion occurs that also sprays the pollen in the air turning the Black Smurfs into their happy blue selves, ending the story -- though not before Jokey tries to fool the Smurfs into thinking that not all the black Smurfs have been dealt with!

A Smurf desperately wishes to be able to fly in the air, and tries all means to defy gravity and accomplish his dream, such as sticking feathers to his arms, building a hot-air balloon or eating yeast. Eventually he becomes so light that he is unable to come back down, so the other Smurfs lasso him down to the ground and have him eat heavy stuff so that he won't be able to fly anymore.

A reclusive sorcerer named Gargamel wants to create the Philosopher's Stone that turns base metals into gold, and his book says that one of the ingredients is a Smurf. After finding out what a Smurf is, and that his favorite food is sarsaparilla, he goes with his cat Azrael to install a trap in the woods.

The next day, two Smurfs go out into the forest to look for nuts. One of them ends up following a sign pointing to sarsaparilla, but instead it leads him into a trap that Gargamel catches him in. The other Smurf, Brainy, returns to the village to tell Papa Smurf about the situation, and all the Smurfs go to Gargamel's home to rescue the prisoner.

When Gargamel first goes out with Azrael to look for mandrake roots, the Smurfs enter and attempt to free the captured Smurf by cutting the rope that holds his cage to the ceiling. But before they can open the cage, Gargamel returns, so they go into hiding and watch as the wizard notices the cut rope and decides to replace it with a thick chain. He then goes to the attic to find the sulfur, which gives the Smurfs the next opportunity to free the captured Smurf. This time three Smurfs pull on a rope that lifts up a metal file to the cage so that the captured Smurf could file his way through the bars. But all too soon Gargamel returns and they go into hiding again, leaving the wizard wondering how a file and a rope got over there. Nevertheless he has all the ingredients put together, which leaves him waiting for the first ray of daylight to come, so he goes to sleep.

During the night, the Smurfs concentrate on a new task: getting the key from Gargamel so they could free the Smurf from his cage. However, they have to deal with Azrael first, so one of them tricks the cat into attacking him while standing near a window. Azrael charges while the Smurf dodges, causing the cat to jump out the window, and then he closes up the window before she can return inside.

Unfortunately, even with all the effort the Smurfs put into getting the key from Gargamel so they could free the captured Smurf, it is all for nothing, for the wizard wakes up at the break of dawn to discover the key mysteriously appearing in the lock, making him wonder if he's gone crazy. Nevertheless, he goes ahead with attempting to add the final ingredient for creating the Philosopher's Stone: the captured Smurf. It is then that Papa Smurf calls his other little Smurfs out from hiding to attack the wizard, overpowering him to the point where he has fallen unconscious. The Smurfs rejoice as they return home to their village, though Brainy on the way home lectures to the once-captured Smurf.

Gargamel wakes up and sees that the Smurfs are gone, so he decides to take his elixir that turns him into a giant to go after them, but after drinking he finds out that the Smurfs have switched the contents of the bottles so that he now appears Smurf-sized. As he now swears to get even with the Smurfs someday for what they have done, his cat Azrael appears behind him ready to play with her new "pet toy".

Publication and other media 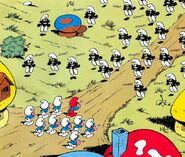 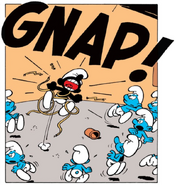 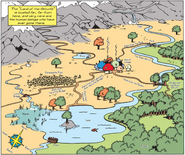 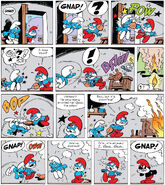 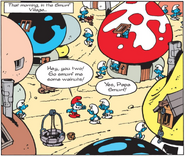 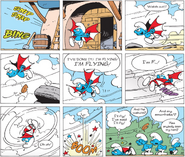 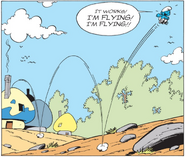 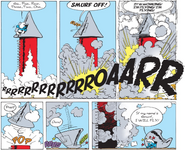 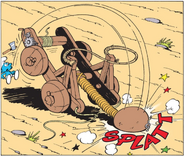 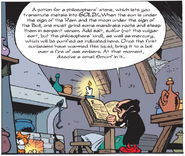 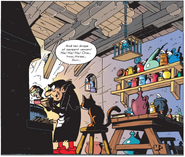 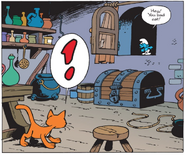 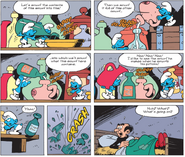