The Smurfs: The Legend Of Smurfy Hollow 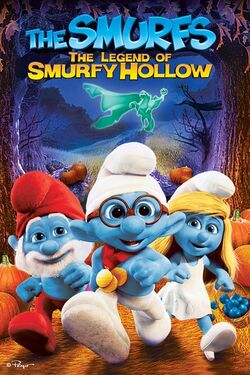 The Smurfs: The Legend Of Smurfy Hollow is an animated feature that was developed for release by Sony Pictures Animation as a standalone cartoon special on September 10, 2013. Like The Smurfs: A Christmas Carol, this animated feature uses both CGI and 2D-style animation. It is the fourth and final feature to take place in the Smurfs Live-Action Film Universe.

As the story begins, Hefty, Clumsy, and Panicky are out in the forest at night with a cart full of smurfberries that has a broken wheel. Unable to fix the wheel, the three of them sit together around a campfire roasting smurfberries when Clumsy has the idea of telling a ghost story to pass the time. Narrator then joins the three Smurfs to tell his own kind of ghost story.

In Narrator's story, the Smurfs gather around for Papa Smurf to announce the Smurfberry Hunt contest in which the Smurfs who collect the most smurfberries will be awarded a medal. Brainy shows up at the gathering wearing multiple medals that he has won over the past years, gloating about how he's going to win this year's medal as well. As the Smurfs collect their buckets and then go out into the forest to pick smurfberries, Gutsy follows Brainy to find out where he's been getting all the smurfberries for winning the contest. He discovers that it's in a place called Smurfy Hollow, an area where the legendary Headless Horseman resides, where there's a secret patch of smurfberries growing plentifully. Gutsy decides to give Brainy a scare by creating a shadow figure of the Headless Horseman, which sends the bespectacled Smurf running in fear. However, while Gutsy uses this opportunity to collect the smurfberries in the secret patch, Brainy finds himself walking into a trap set up by the evil wizard Gargamel.

By the time the contest ends and the Smurfs have appeared with their buckets for Papa Smurf to judge the winner, Gutsy shows up with a bucket overloaded with smurfberries and thus is declared the winner. However, Suspicious Smurf begins to wonder where Brainy is, since he hasn't shown up with his bucket of smurfberries. Realizing that he may be found out for cheating, Gutsy goes out into the forest alone to find Brainy, but is soon joined by Smurfette, who finds out from Gutsy that Brainy is in Smurfy Hollow. They both go together and find Brainy in a cage trap set up by Gargamel, only to soon join him in cage traps of their own. Azrael, who was prowling the forest by himself, is soon alerted to the Smurfs' presence and goes to get his master to inform him of the captured Smurfs.

Gutsy, Brainy, and Smurfette work on a plan to get themselves out of their cages, and soon Gutsy swings his cage repeatedly until it bumps into Brainy's, which then bumps into Smurfette's, and the cages continue to bump into each other until Gutsy's and Brainy's cages break, freeing them. However, Smurfette is still stuck in her cage, and Gutsy and Brainy try to figure out how to get her out of there when Gargamel appears with Azrael, and so they go into hiding while the evil wizard opens the cage to deal with the one Smurf that is still captured.

With the three Smurfs returning safely home, Gutsy and Brainy begin to apologize to each other for what they did, with Gutsy admitting that he was jealous about Brainy always winning and Brainy admitting that he was selfish in keeping the secret patch of smurfberries all to himself. Glad to see that two of his little Smurfs have learned their lesson, Papa Smurf proceeds to reward Gutsy with the medal, but Gutsy decides to give it to Brainy instead, who then insists that Gutsy should have it, and so the two Smurfs fight over who should get the medal when it flies out of their hands and lands looped around Lazy's neck, thereby declaring him to be the winner. As the Smurfs gather around the stage to see Gutsy and Brainy dance with each other, Papa Smurf goes out into the forest to thank the Headless Horseman, who turns out to be a goat that he used his magic on to make him appear as a ghost.

With Narrator's ghost story now over, Hefty claims that he wasn't scared, but finds himself jumping into Narrator's arms at the sound of a bat screeching. Clumsy sees that they are now surrounded by bats, which scares all four Smurfs and sends them running back to the village.