The Smurfs is a Belgian CGI animated television series developed by IMPS and Dupuis Audiovisuel which began to air worldwide on April 18, 2021 on RTBF Auvio in Belgium and on May 9, 2021 on TF1 in France. It features full CGI animation similar to that of the animated film Smurfs: The Lost Village. Episodes of the new series run 13 minutes each, with the exceptions of half-hour specials such as The Pluffs!, which are split as 13 minute two-part episodes as well. The television series was developed as a continuation of the original comic book series[1].

On June 18, 2020, it was revealed that the series will air on Nickelodeon in the United States through the fall of 2021, later specified to be in October. However, it was pushed, and it officially premiered on Nickelodeon on September 10, 2021 (Which is intended to match the release date of the 1981 TV series which premiered in the United States that same day 40 years earlier.)

The pitch bible for the series was made available for download in late 2019 on the official SmurfBusiness site via a QR code in their 2019-2020 Audiovisual Catalogue. According to the file name, this version of the bible dates back to September 2018.

The character section reveals that the Smurfettes introduced in The Lost Village movie, Baby Smurf, and Wild Smurf (likely in a later date) are included in the series.

Despite the spoiler alert the catalogue itself gives, it should be noted that some info in the bible such as characters, personalities, and relationships may be slightly altered in (or may not match) the final product.

The pilot reel was first uploaded to Vimeo in early 2018. Another teaser trailer (or animation test) for the series was shown at an event in October 2018. A recording of it was then leaked onto Facebook, which has since been removed. A teaser was posted on Vimeo by IMPS on June 25, 2020, showing animated footage of Jokey and Harmony Smurf. The teaser was later uploaded to the official Smurfs YouTube Channel on October 6, 2020.

On February 7, 2022, the show was renewed for a second season, along with multiple movies in the works at Nickelodeon.[2]

More than 30 years after the airing of the final episode of the 1981 television series, Véronique Culliford, the founder of Peyo Productions and IMPS envisioned an idea for a brand-new Smurfs television series for some time. When the final Sony Pictures movie, Smurfs: The Lost Village was released, she felt it was the right time to initiate the project. The series was to be produced by Peyo Productions and Dupuis Audiovisuel, and its producer was Véronique Culliford.

When the cartoon show was in development, Peyo Productions remained vigilant on maintaining that the setting and characters are true to the vision of the source material (e.g., humor, adventure, dialogue, action, suspense, etc.) - but they remained open to creative freedom (in contrast of Peyo vetoing any extreme changes such as "Americanization" of the 1981 series) and that the settings and characters are brought up to date. The writers introduced changes such as developing the characters more fully (A notable example they introduced was Smurfette becoming a Kill Bill-styled action girl being an expert on the master of Smurf-Fu, and Brainy Smurf being Papa Smurf's assistant from the 1981 series is reinstated); the "Modernization" of the setting: one aspect included modern everyday living customs such as skateboarding and Gargamel's crystal ball being an equivalent to a virtual assistant device, the regular use of vehicles such as smurfways (the Smurf equivalent to segways) and smurfmobiles (though limited to Smurfs with specific occupations), a modern employment system that involves hiring and/or firing Smurfs from jobs; and the series was aimed at an older audience.

Multiple times during production, Véronique Culliford, Peyo Productions and the television networks approved original story ideas created by the writers and having discussions with the writers by giving notes during the production of an episode as part of a team effort. The scenarios for the episodes in question were inspired by the original comics as they were written in close collaboration with Peyo Productions.

This list will be filled as episodes appear on air.

The intro starts off with three Smurfs putting up a P sign that says "Peyo Productions", with Smurfstorm and Smurfwillow watching. Suddenly, Brainy's Smurfway comes in with Brainy on it. All three Smurfs fall down. Papa Smurf is busy walking with potions and Brainy crashes into him. Clumsy and Dimwitty drive their Fire Brigade truck around the village as Papa Smurf and Brainy are on the smurfway. Smurfette is shown with her Smurf-Fu costume. The theme transitions to Gargamel's castle, where the Smurfs are snooping around and Gargamel and Azrael catch them. The Smurfettes are seen again and Storm shoots a bone arrow at Gargamel's head. Handy then transitions the scene with his jetpack and we see Papa Smurf, Storm, Brainy, Handy, Hefty, Clumsy, Dimwitty, Blossom, Jokey, Willow, and Smurfette.

A 2018 picture, revealing the title and a Smurf's legs. 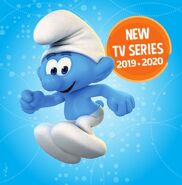 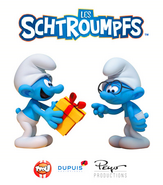