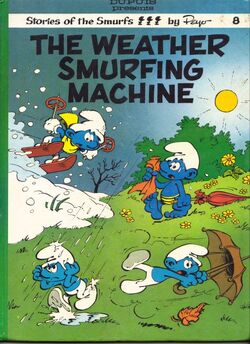 For other uses, see The Weather-Smurfing Machine (disambiguation)

One day, Handy wakes up to find that the weather is rainy. Handy suddenly has inspiration for an invention that can control the weather, and soon he's at his drawing desk mapping out the plans for it.

Handy is at work converting the watermill into his latest invention -- the weather-smurfing machine. Papa Smurf shows up with some other Smurfs at the watermill for Handy's demonstration of the device: he pulls a switch, which causes a Smurf figure in a bathing suit to come out of a hatch on the roof like a cuckoo in a cuckoo clock. Soon the sky clears, and it's a bright sunny day! By activating another switch, a Smurf figure with an umbrella pops out of the hatch, and then the skies start pouring rain. Papa Smurf tells Handy Smurf to set the machine in a sunny day to make a picnic.

As the Smurfs go off to the picnic in the forest by the river, Poet stays behind to create his "Ode To The Sun". In the meantime, Farmer is in his fields looking at his crops, seeing that they could use some rain. He goes over to the weather-smurfing machine and activates the rain-making switch, and then the skies start pouring rain. Poet feels a drop while he's busy composing and realizes that somebody set it to rain. He goes to the machine and has the skies become sunny again. Now Farmer is disappointed, so he goes back to the machine to make the skies rainy. Poet again has trouble composing and returns to the machine to bring back the sun. Farmer's crops start to wither, so he returns to the machine to bring back the rain.

Up at the picnic, the Smurfs are seeing rain off and on, which makes Brainy upset that his umbrella "chooses" not to open when it is rainy, and to open when it stops raining. Papa Smurf tells Handy that his weather-smurfing machine may have some problems that he needs to work out. At the machine, Poet and Farmer are now fighting over who gets to control what kind of weather they will have when they eventually break the controls, now causing weather to go out of control. Even the birds on the branches are confused by the constantly-changing weather patterns.

Handy Smurf decides that the best course of action right now is to return to the village so he can go fix his weather-smurfing machine. But as he heads back, he meets Farmer and Poet, who come to him telling that they have broken the machine. Upset at the two Smurfs, Handy races to cross the Smurf river when other Smurfs start seeing a big log going down the river, headed straight for the bridge, destroying it.

Meanwhile, Papa Smurf leads his Smurfs back to the village, warning his little Smurfs to stick together. As they take the alternate route, the Smurfs are beset with heavy rainstorms, thick fog, chilly snowfalls, and muddy grounds. They briefly rest behind a rock, where some Smurfs are complaining that they will never see home and others are trying to place the blame on Handy Smurf.

When the Smurfs are about to reach the bridge, they find the river carrying it, then Papa Smurf finds Handy Smurf, Poet Smurf and Farmer Smurf, who tell him what happened. Hefty Smurf tries to create an alternate route to cross the river by bravely swimming to the other side with a rope tied to his waist, wich the Smurfs should use to cross after tying it to the side they are at. When this fails, Hefty Smurf uses the rope to lasso a log that the Smurfs use as an improvised bridge.

Upon reaching the weather-smurfing machine, the Smurfs find out that it is so out of control that there is no way they can stop it -- until Papa Smurf sees Brainy's umbrella and decides to turn it into a kite. Attaching it to the control panel of the machine with string, Papa Smurf flies the kite straight into the suddenly stormy sky. Lightning then strikes the kite, sending enough electricity into the weather-smurfing machine that totally destroys it, restoring climate control back to normal. The Smurfs learn that day that control of the weather belongs solely in the hands of nature.