There have been some planned Smurf videogames, as follows:

Players must solve basic learning tasks (like addition and subtraction) to return the Smurfs safely home to their village and away from Gargamel's Castle. Although preliminary artwork was created, this game was never released.

An adaptation of the same game that appeared on the Atari 2600 and the ColecoVision. CollectorVision was in the process of developing an official version, but due to legal reasons, it was eventually converted into Sydney Hunter And The Shrines Of Peril.

(Coleco for Atari 2600, ColecoVision, and Intellivision)

The game was advertised in promotional flyers but never worked on or released. "Join the Smurfs on a treasure hunt! The whole Smurf Village is celebrating Smurfette's Birthday! And you can join in the celebration. Send a Smurf character to seek out the right present but watch out for unexpected troubles along the way. Start by taking your hero out of the village in a car on a drive through the forest. Check for clues along the way. It sounds simple, but there are all kinds of dangers and difficulties in your path. Once everything needed is on the table, Smurfette appears and the party begins."

This game was also given the temporary title of Papa Smurf's Treasure Hunt.

An upgraded version of Smurf: Rescue In Gargamel's Castle for the unreleased Super Game Module.

A platform game that would be released for this system.

An adventure game that would be released for this system.

Ad for Smurfette's Birthday for the Atari 2600

Ad for Papa Smurf's Treasure Hunt for the ColecoVision 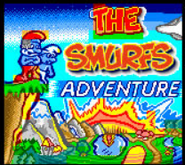 Starting menu of the Smurfs Adventure game
Add a photo to this gallery
Retrieved from "https://smurfs.fandom.com/wiki/Unreleased_Smurf_videogames?oldid=59954"
Community content is available under CC-BY-SA unless otherwise noted.